skip to main | skip to sidebar

I would like to bring to the readers' notice, a glaring example of misconduct shown by the stock broker company Share Khan. This happened to my father, who frequently buys and sells stock through such brokers. I will fill in the complete details later, as soon as I get them from my dad. Here is what happened:

1. My parents live in Gorakhpur, where my father is posted as the manager of the city branch of a nationalized bank. Share Khan insisted that my father open an account with them, which he did. This account can be monitored online.

2. Whenever the customer wishes to buy/sell shares, he just calls up the company's local office/agent who then follows up with the request. Companies like IndiaBulls and Karvy call up the customer on the same evening to confirm the transactions. A written confirmation arrives 2-3 days later. This minimizes the need for online confirmation. However, Share Khan does not make either telephonic or written confirmations.

3. Since my father is not used to checking his account daily, he usually checks it online every 3-4 days or so. Around a month after he had opened his account, on July 6th he saw an unauthorized transaction worth approximately Rs. 2 lakhs, that had taken place on 3rd July. My father immediately called up the local office and he was assured that it would be redressed.

4. To his horror, my father realized during subsequent days that there were more unauthorized transactions on 9th, 10th, 12th, 16th and 17th July. Some of those days saw as much as Rs 15 lakh worth of unauthorized transactions. In all, the total unauthorized amount transacted was more than Rs 50 lakh rupees. Here I would like to clarify that:
a) My father was unaware of these subsequent transctions because these were logged online after a huge gap of around 8-9 days after the actual transaction had taken place. This kind of lag in logging financial transactions is totally unheard of, as the other companies log their transactions by the end of the day.
b) Even after my father's complaint after the first transaction, the agent incharge of the account was not taken off the account (let alone fired). He was operating for atleast three more days.

5. Finally on 20th, my dad met the marketing guy who had opened the account. He claimed that the invested stocks were showing a loss of Rs 20,000. If my father would bear half of that, the rest would be born jointly by the staff at Gorakhpur. After giving this ridiculous option, he went on to say that he would only be able to contribute his part on 1st August when he gets his salary. My father then emailed the head-office about the whole matter.

6. The head-office asked an officer from Lucknow to look into it. The guy, however, came and went without meeting my father inspite of an appointment. Later, an officer from Delhi came to Gorakhpur twice but the visits were fruitless. On his second visit, he could not spare any time to meet my father and discuss the issue.

7. My dad then met the local manager, who was ordered by the head office to deal with the issue. He said that the invested stocks were showing a loss of around Rs 87,000 rather than Rs 20,000 as mentioned before. He said that the company was willing to pitch in around Rs 50,000 and dad would have to "bear" the rest of the loss. The manager used an emotional crutch, saying that otherwise he himself would have to pay Rs 37,000 from his pocket, which is obviously a huge drain on a middle class person like himself. He forgot that my dad is also a middle class salaried person, who is suffering for no fault of his.

8. The agent incharge (Alok) was sacked from his job. He then called up my dad, requesting him to take his complaint back so that he can return to his job (what naivety!) When his requests failed, he asked his father to call up my dad on his behalf. The father began with apologies, and ended with saying "baad mein mat bolna ki warn nahi kiya" (Don't crib later that I didn't warn you). There is hardly anything you can say to a person like that. Later on, the editor of a local newspaper called up my dad, requesting to withdraw the complaint. He too, ended the conversation on a similar note. By this time, my parents were apprehensive, especially considering that they are in a mafia-ridden place like Gorakhpur.

9. Since 20th July, my father had written emails to the head office of Share Khan, complaining about the inaction, and did not got a single written response. At first he used to get phone calls to the tune of "we are looking into it", but one fine day, he got a call saying "aapko itni jaldi kya hai? roz email kar dete ho" (What's the big hurry? Why are you emailing everyday?). The SoB who said this probably hasn't ever been asked to recoup someone else's losses to the tune of Rs 87,000.

This is where matters stand now. At this point, our options are:
1. To go to the police and the court. This is our last resort because:
a) Any court case will be held in Bombay.
b) The case might drag on and we might have to spend a fortune paying the lawyers.

2. Contact a watchdog agency or some knowledgeable authority like Sucheta Dalal. We are in the process of doing this right now.

I hope this serves as a wakeup call to all of you who are blissfully unaware of the shady dealings of such private companies.

Blogger searches for "The Spirit of Mumbai", finds slush instead

(Note: The continuation of the caste-system post shall be done at a later date. Right now we have an all-important breaking news at hand.)

BOMBAY (2nd Aug): In what appears to be a tragedy of gigantic proportions, local blogger Rahul Gupta reports that he failed to find the Spirit of Mumbai during the recent 4-day downpour in the city. Sitting on an ambulance stretcher marked "FBI", wrapped in a blanket and sipping coffee, the blogger recounts his horrifying ordeal during those four gut-wrenchingly cruel days in the city:

It had rained almost continuously on the first day and all my laundry was far from being dry. This was a huge problem for me because of the acute shortage of dry underwear. Luckily for me, I was in the city with an indomitable spirit. Or so I thought. I went to my neighbour's house, said hi to him for probably the first time in my life, and poured my saga on him. However, my polite request for a clean pair of boxers was denied with extreme prejudice. That was a jolt out of the blue. I should have sensed something was amiss with Mumbaikars that morning. I mean, people just do not deny such a request, do they?

However, still undaunted and forced to be unfettered, I set out for my daily 15-minute journey to Powai. However, as soon as I reached the road, my worst nightmares came true. Water on the road was atleast 1cm deep and would have drowned m 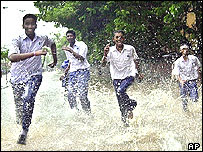 y little toe, had I not worn my sneakers. But if 26 July has taught us something, it is the awesome concept of "human chains". Brimming with positive attitude, I beckoned some passers-by to make a human chain and help each get across the 4 metre wide road. "Leave no man behind, Goddamnit!" was my motto. Strangely, people started giving me weird looks. They looked like they would rather risk their lives in toe-deep water than form a human-chain. This photo shows a bunch of kids living on the edge, without a chain, as water surges to toe-deep levels. And I despaired. It was like I didn't even know this city anymore.

I counted each passing hour of these monsoon-filled days, alienated from all of these so-called Mumbaikars. On the fourth day of the torrential rains, I went to the market to have my lunch -- Vada Pao (ordering Pao is compulsory here. Many a times I have had Paneer Tikka with Pao). As I passed some buildings, I couldn't help but notice the plight of the ground floor residents. Sure, the water was low right now, but what about two days from now? This rekindled my spirit, and I tried to reach out to my ground floor neighbours. I volunteered to give them a room in my apartment and also offered them my services in moving their valuables to my house. Both the girls refused. Again, with extreme prejudice.

All this was days ago, and I am still battling depression. Where has the spirit gone? Where is the faith? I cry myself to sleep everyday, thinking about these questions.

And so ends the account of the blogger. This blog wishes to state that the blogger is in good spirit now, although he still winces when the dreaded 3-word phrase is uttered in his vicinity. With his mood upbeat, the blogger wishes to go to Delhi in the near futue and perpetuate the "Dil waalo ki Delhi" legend that he so firmly believes in.

Asterix
Running smoothly on the engine of cynicism since 1980.