skip to main | skip to sidebar

DELHI (31 Oct): 2 hrs and 7 mins (my best so far), and could have been easily reduced to 2 hrs if my new shoes had cleared the training runs.

Kids, we all learnt a lesson on the 28th. Never, never run a long distance race with worn out shoes, no matter how well they have served you in the past. My legs are still fatigued from the race. 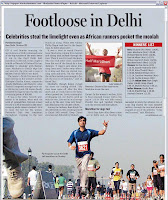 Rants apart, this was a nice race, with a different route -- Chanakyapuri - Safdarjung Flyover - Prithviraaj Road - India Gate - Rajpath and back. The crowd was bigger, with more serious runners. There were a lot of first timers too -- Girish, Nitendra and Shantanu included. Nitendra got his picture in the paper (bib no. 3621), and is now contemplating modeling for Jockey and Rayban.

All was not hunky dory though. With idiots like Vodafone and Indiatimes managing the event, thousands of finishers had to stand in the queue for another 2 hrs before they could get their timing certificates and medals.

To make up for the boring marathon details, I leave you now with two yummilicious and totally unrelated pictures:

The dishes in front are ofcourse RajKachori (left) and Paapri-chaat (right). The ones in the background are not Chhole Bhature, but an awesome Bengali dish called RadhaBallavi (I hope I got the spelling right). The side dish is Dum Aaloo with a mouth watering gravy. All this food is courtesy the Delhi and Bengal food stalls at Dilli Haat. 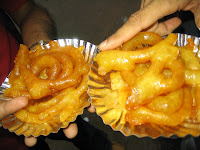 Exhibit number 2 comprises of Jalebis from a hole-in-the-wall shop in Chandni Chowk (Old Delhi). It is the area's most open secret. The finger puts the thickness of the jalebi in perspective. It is the tastiest jalebi I have ever eaten, and its no wonder that a single piece (which is huge and very fulfilling) costs around 20 bucks. As a friend from Bombay put it -- it feels like a couple of gulabjamuns have exploded in your mouth.


Now would be a good time to wipe all that drool from your shirt.

DELHI (Oct 7): Sources reveal that in an act of unprecedented stereotyping, local lad Rahul Gupta contemplates confronting one of his Bengali colleagues to get to the root of the UPA-communist nuke deal stand-off.

"I want nuclear energy and I want it now. I can't wait for these sissies to chalk out a compromise. I want to know whats bothering these goddamn communists", gushes the blogger.

He thinks that the logical next step is to contact a Bengali, who alone can "explain things as they stand, along with their reasons" (sic). Apparently this statement has caused a lot of grief to his Malyali colleagues who are feeling left out inspite of being communists. "Well lets face it. Keralites are busy dumping hair oil on their scalps and eating beef all day long. Even a monkey can argue better than them!", justifies Rahul.

He goes on to list the names of his various Bengali friends, who are top targets for his machinations -- Debojyoti, Sushrut and a fellow known only as 'Sarkar' (real names hidden to protect the victims). However, he knows that arguing with Bengalis is tougher than beating Australia in one-day matches.

"I want to equal their intellectual levels before I discuss this issue, so I have started doing Bengali stuff -- staging rallies, leaving work at 2 pm, swimming in the local pond to catch fresh water fish, and increasing my decibel level and blood pressure to 200 during arguments about football/cricket", he says as he describes the preliminary qualifying procedure for debating with a Bengali.

Well, whatever his means are, we wish this local nut the best of luck in his endeavours. He is going to need it. No one has ever survived a debate with a Bengali and lived on to tell the tale.

UPDATE: As this article was going to the press, we received news that the much anticipated confrontation indeed took place at the office coffee machine after lunch break. After a tireless and commendable effort by the blogger, his bemused Bengali colleague just asked him to get the hell out of there, go plough a field, commit female foeticide or join the army or do whatever it is that Haryanvis are supposed to do.

Asterix
Running smoothly on the engine of cynicism since 1980.